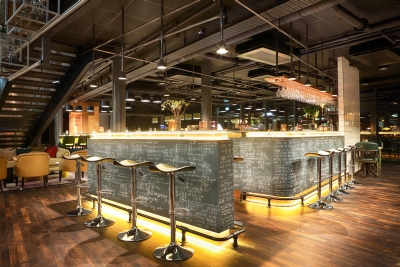 The “genius” designed bar and restaurant Cuckoo's Nest is part of the recently opened Radisson Blu Riverside Hotel – Gothenburg, Sweden.  The interior design has been inspired by the feature film “A Beautiful Mind”.  According to designer, Erik Nissen Johansen, the design is on the border between genius and madness. This combination has created the perfect ambiance needed to win “Best Bar Design” - European Hotel Design Awards 2013.

“It was just a year ago, that our team sat and tested glassware in a barracks, while the hotel was under construction.  Every little detail was important to assure our guests would have a visual experience to inspire their creativity when staying at Radisson Blu Riverside. Next stop London, where we not only went to the finals of Europe's top design bars but also won - it feels awesome!  All our planning, dedication and our hard work paid off. Working with Stylt Trampoli Architects was amazing their ideas and creativity were able to flow and become a reality, it was a very inspiring process”, says Malin Franck, General Manager - Radisson Blu Riverside.

The Cuckoo’s Nest’s concept is described in three different small, medium, large.  This has been very popular with our hotel and restaurant guests, allowing them the right to choose what suits their palate best.  The menu ranges from fresh Scandinavia seafood and delicacies straight from the grill.

Between Genius and Madness - For Designer Erik Nissen, the team at Stylt Trampoli and Malin Franck, the concept was obvious.

The agency has created several large hotels and restaurants around the world and is known to work with storytelling. Inspiration for Cuckoo's Nest comes from the local area and films, bringing in different elements for instance, an old English library, Swedish classrooms and laboratory environments, always with the goal to encourage creative thinking and new inspirations for the guest. Volvo, Ericsson and Chalmers University of Technology have contributed ideas and objects that have become part of the decor.

An Innovative Hotel with a View
Radisson Blu Riverside hotel and their restaurant Cuckoo's Nest are located at Gothenburg's old wharf area that has become a trendy residential and world-leading arena for research, innovation and education within new technologies and communication.  Radisson Blu Riverside has a restaurant/bar that offers a meeting place for visionaries and dreamers, creators, innovators and guests that have a passion for unique hotel stays.  The hotel has 265 stylish rooms and suites, free high speed wireless internet, 24 hour room service, wellness center with two indoor spa pools, gym, outdoor hot tub and terrace that has the most incredible view of Gothenburg harbor.

Interesting and Provocative Design - The judges said “this was an engaging and lively bar environment that lends itself to a sociable atmosphere, with interesting and provocative design features throughout. Once again, this concept was highly commended by the judges for its storytelling and sense of place achieved by designers Stylt Trampoli.”

Each year European Hotel Design Awards celebrates outstanding hotel design and architecture and honors the industry's leading architects and designers. The nominees are in 13 categories and are chosen by a panel of experts.  http://www.europeanhoteldesignawards.com/
http://www.radissonblu.com/riversidehotel-gothenburg

About Radisson Blu
Radisson Blu is one of the world’s leading brands with more than 270 hotels in operation in 62 countries. Radisson Blu’s vibrant, contemporary and engaging hospitality is characterized by a unique Yes I Can!SM service philosophy, and all of its first class hotels offer a range of World of Radisson features that are empathetic to the challenges of modern travel, including the 100% Satisfaction Guarantee. Distinguished the world over as the HOTELS DESIGNED TO SAY YES! TM , Radisson Blu offers a vivid visual celebration of leading-edge style where the delight is in the detail.  Radisson Blu properties are located in prime locations and in major cities, airport gateways and leisure destinations across the world.

For reservations and more information visit www.radissonblu.com, or the newsroom at http://carlsonrezidor.carlsonnewsroom.com/brand/radisson-blu/