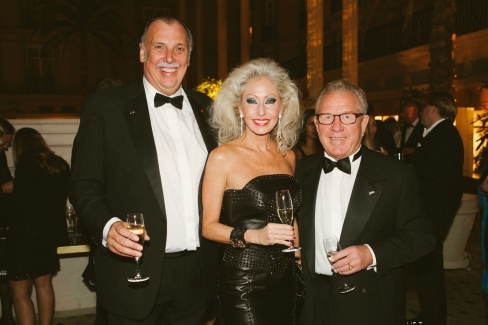 Rezidor’s President & CEO Kurt Ritter has received the Lifetime Achievement Award at the European Hospitality Awards 2012. During a gala event at the prestigious The Landmark hotel in London, Ritter was honoured for his extraordinary career: He has been appointed Rezidor’s President & CEO in 1989 and is most probably the longest serving Chief Executive Officer of the hospitality industry. Under his leadership, Rezidor became one of the world’s fastest growing hotel companies and a member of the Carlson Rezidor Hotel Group. Rezidor’s current portfolio features more than 430 hotels with 95,000 rooms in 70 countries across Europe, the Middle East and Africa. In September 2012 Ritter announced his retirement at the end of the year after which he will serve as a strategic advisor to Carlson. Ritter’s successor as Rezidor’s President & CEO will be Wolfgang M. Neumann.
“The remarkable rise of Rezidor is inseparable from Kurt Ritter’s; and it is difficult to think of anyone in the business today who has dedicated more of his or her life to the hospitality industry”, commented the jury.
“I am very honoured to receive this Lifetime Achievement Award – and yet very humble. Without my family and my team, my success would not have been possible. I would like to thank my family and all Rezidorians; they have made me the man and leader I am”, said Kurt Ritter.

Swiss-born Kurt Ritter grew up in his parents’ hotel in Interlaken, and was educated at the famous École de Hôtelière in Lausanne. After having spent some time at the Hotel Bellevue Palace in Berne and with Ramada International Hotels in Belgium, France, Germany and Sweden Ritter joined Rezidor in 1976. He served as General Manager in Sweden and Kuwait, as Vice President Middle East & Far East, based in Singapore, and finally as the President & CEO, based in Oslo and then in Brussels. Key dates of his career include the Master Franchise Agreement with Carlson Hotels Worldwide to create Radisson SAS in 1994, and the agreement with Carlson in 2002 to also develop the brands Country Inns & Suites, Park Inn and Regent across Europe, the Middle East and Africa. In 2005, Ritter signed the worldwide licence agreement with Missoni to develop and operate the luxury lifestyle brand Hotel Missoni, and in 2006 he was responsible for Rezidor’s IPO on the Stockholm Stock Exchange. In 2012, he co-launched the Carlson Rezidor Hotel Group and also signed a Strategic Alliance Agreement with Regent Hotels & Resorts.

Kurt Ritter’s charisma, his genuine belief in hospitality, and his straightforward approach are admired and awarded throughout the industry. Ritter was the "Corporate Hotelier of the World 2002", received the "International Hotel Investment Forum Lifetime Achievement Award 2004", and the "MKG Lifetime Achievement Award 2008”. He also holds two Honorary Doctorates of Johnson & Wales University, Providence (USA) and Oxford Brookes University (UK).

About the Rezidor Hotel Group

The Rezidor Hotel Group is one of the fastest growing hotel companies worldwide and a member of the Carlson Rezidor Hotel Group, one of the world’s ten largest hotel groups. Rezidor features a portfolio of more than 430 hotels in operation and under development with 95,000 rooms in 70 countries. Rezidor operates the brands Radisson Blu and Park Inn by Radisson in Europe, the Middle East and Africa, along with the Club Carlson loyalty programme for frequent hotel guests. Under a worldwide licence agreement with the iconic Italian fashion house Missoni, Rezidor also operates and develops the luxury lifestyle brand Hotel Missoni. Following a Strategic Alliance Agreement with Regent Hotels & Resorts, Rezidor will develop and operate new Regent properties in EMEA.

In November 2006, Rezidor was listed on the Stockholm Stock Exchange. Carlson, a privately held, global hospitality and travel company, based in Minneapolis (USA), is the majority shareholder.

The Corporate office of The Rezidor Hotel Group is based in Brussels, Belgium. For more information, visit www.rezidor.com and www.carlsonrezidor.com