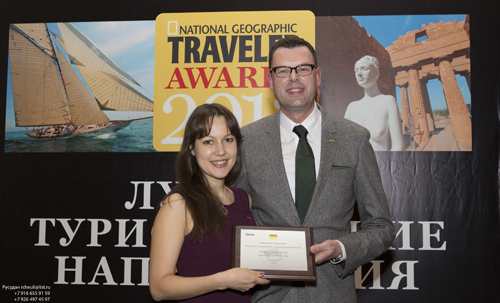 Radisson Blu, operated by the Carlson Rezidor, the leading international hotel group in Russia, CIS & Baltics, has been honored as the Best Hotel Chain at the National Geographic Traveler Awards 2013 (Russia). Radisson Blu has taken home the award for the second consecutive year. The winner was determined based on the results of a reader vote held on the magazine’s website nat-geo.ru from August 15th through September 30th. This year more than 25% of the voters selected Radisson Blu as the Best Hotel Chain.

“It is a great honor that Radisson Blu received the National Geographic Traveler Award as the Best Hotel Chain in Russia for the second consecutive year. The acknowledgment is exceptionally rewarding  for us as it highlights the achievements of our hotels by the most important audience: our guests and partners. I would like  to express my sincere gratitude to those who have voted for Radisson Blu  – said Tom Flanagan, Area Vice-President for Eastern Europe at The Rezidor Hotel Group, who collected the award at the ceremony in Moscow. – The fact that Radisson Blu was named as the Best Hotel Chain is an affirmation of the hotel’s first class position and unique “Yes, I Can!” service that matches highest of international standards. It’s also extremely motivating for our hotels to exceed the expectations and create bright spots for our guests.”

The National Geographic Traveler Awards 2013 ceremony was attended by the Russian tourism market’s key stakeholders, including representatives of leading tourism companies, embassies and airlines. The competition along with the vote is held on www.nat-geo.ru on an annual basis since 2011. The aim of the online vote is to determine the best tourist destinations among the most popular vacation types.

Radisson Blu is one of the world’s leading brands with more than 290 hotels in operation in 62 countries. It is also Europe’s largest upper upscale brand. Radisson Blu’s vibrant, contemporary and engaging hospitality is characterized by a unique Yes I Can!SM service philosophy, and all of its first class hotels offer a range of signature features that are empathetic to the challenges of modern travel, including the 100% Satisfaction Guarantee. Distinguished the world over as the HOTELS DESIGNED TO SAY YES! TM , Radisson Blu offers a vivid visual celebration of leading-edge style where the delight is in the detail. Radisson Blu properties are located in prime locations and in major cities, airport gateways and leisure destinations across the world.

Carlson Rezidor Hotel Group is one of the world’s largest and most dynamic hotel groups. The portfolio of the Carlson Rezidor Hotel Group includes more than 1,300 hotels in operation and under development, a global footprint spanning 100 countries and territories and a powerful set of global brands (Radisson Blu, Radisson®, Park Plaza®, Park Inn by Radisson, Country Inns & Suites By CarlsonSM and Hotel Missoni). The group plans to grow the portfolio to nearly 1,500 hotels in operation and under development by 2015. In most of the group’s hotels, guests can benefit from the loyalty program Club CarlsonSM, one of the most rewarding loyalty programs in the world. Carlson Rezidor Hotel Group and its brands employ more than 85,000 people.